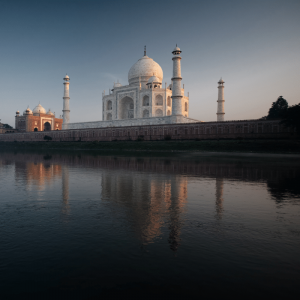 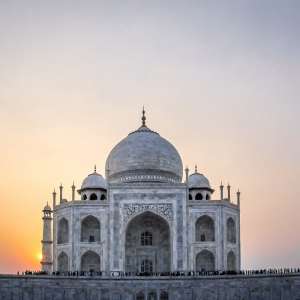 Stop At: Taj Mahal, Agra, Agra District, Uttar Pradesh
DAY 1: Arrive Delhi to Agra
Following a pick-up from your accommodation in Delhi, Gurgaon or Noida, transfer to Agra by private, air-conditioned vehicle. Relax on the 3.5-hour drive,
See Taj Mahal one of the seven wonders in the world. Marvel at the spectacular marble mausoleum from the outside, before looking inside the temple to Mumtaz Mahal, beloved wife of the Mughal emperor Shah Jahan.

Stop At: Agra Fort, Agra, Agra District, Uttar Pradesh
Later, continue to the nearby Red Fort (Agra Fort) to see the beautiful pavilions of a walled city.
Take a Break and enjoy some free time for lunch (own expense).
Duration: 2 minutes

Stop At: Jantar Mantar – Jaipur, Jaipur, Jaipur District, Rajasthan
carry on to the Jantar Mantar Observatory with its 90 ft. sundial and explore the bustling and colorful markets of the old city and in the evening drive back to Delhi. Overnight stay at the hotel.
Duration: 1 minute

Stop At: India Gate, New Delhi, National Capital Territory of Delhi
DAY 04: Delhi Local + Departure
This morning after breakfast checks out from hotel and Raj Ghat.
Raj Ghat is a memorial dedicated to Mahatma Gandhi in Delhi, India. Originally it was the name of a historic ghat of Old Delhi (Shahjahanabad). Close to it, and east of Daryaganj was Raj Ghat Gate of the walled city, opening at Raj Ghat to the west bank of the Yamuna River.
Duration: 1 hour

Stop At: India Gate, New Delhi, National Capital Territory of Delhi
Visit The India Gate is a war memorial located astride the Rajpath, on the eastern edge of the “ceremonial axis” of New Delhi, India, formerly called Kingsway.
Duration: 1 minute

Stop At: Lotus Temple, New Delhi, National Capital Territory of Delhi
Visit last destination in delhi the Lotus Temple, located in Delhi, India, is a Bahá’í House of Worship that was dedicated in December 1986. Notable for its flowerlike shape, it has become a prominent attraction in the city.
Duration: 1 hour