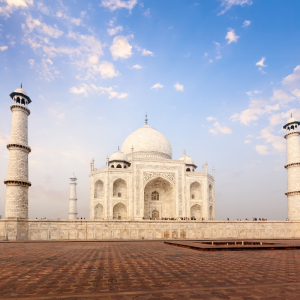 Itinerary
This is a typical itinerary for this product

Following a pick-up from your accommodation in Delhi, Gurgaon or Noida at 03:00AM, transfer to Agra by private, air-conditioned vehicle. Relax on the 3.5-hour drive, arriving in Agra at approximately 06:15 just in time for a great view of the sunrise over the Taj Mahal.
Marvel at the spectacular marble mausoleum from the outside, before looking inside the temple to Mumtaz Mahal, beloved wife of the Mughal emperor Shah Jahan.

Later, continue to the nearby Red Fort (Agra Fort) to see the beautiful pavilions of a walled city.
Break at around 10:00, and enjoy some free time for breakfast (own expense).